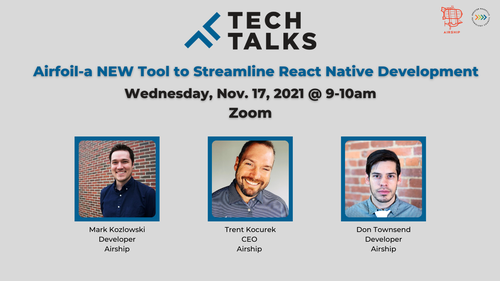 React Native developers can spend days on time-consuming, annoying, and repeatable tasks that are great candidates for automation. Trent Kocurek, Mark Kozlowski, and Don Townsend of Airship in Birmingham, AL have created a tool called Airfoil to automate and streamline React Native development. Airfoil tool is a “swiss-army-knife” of convenience features such as:

React Native Developers of all skill levels will benefit from this discussion. Join us online on November 17th for a discussion and demo of Airfoil. Along with access to download Airfoil for anyone interested in using the tool.

Trent Kocurek is CEO and co-founder of Airship, he and co-founder, Adam Aldrich founded Airship in 2016 with the vision of creating transformational change through remarkable experiences. His focus is on building a team of passionate, well-rounded engineers and business people to help Airship expand into new markets in need of quality custom software applications.

Mark Kozlowski comes to software development from the field of engineering. His attention to detail translates exceptionally well into development work. In fact, Mark says he has his dream job building products that showcase his passion for creativity and thoughtful design. He enjoys the creative aspect that allows him to craft solutions after the team has finalized the needs and objectives of an application.

Don is a creator, code crafter, and professional problem solver. Don works across many stacks, swapping from the server to client-facing UIs including Web and Mobile. Recently Don has worked on exciting projects including iOT technologies that use Bluetooth Low Energy connectivity for real-time device monitoring, integrated into accessible, easy-to-use mobile apps that feature elegant custom layout and design by in-house talent at Airship.